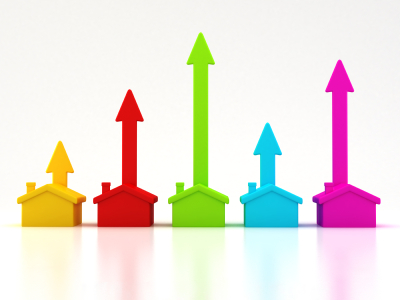 Home prices rose 4.3% the 12 months ended in October, according to a widely watched survey, outpacing analyst expectations and underscoring a strengthening housing recovery.

Still, the Standard & Poor’s Case-Shiller index of 20 major cities, out Wednesday, dipped 0.1% in October from a month earlier. That was expected given that home prices tend to be lower in fall and winter than in spring and summer.

Year-over-year trends are more meaningful. In 19 of the 20 cities surveyed, annual returns in October were higher than September, the data show.

“It is clear that the housing recovery is gathering strength,” said David Blitzer, chairman of the home price index committee.

He also says it’s clear that housing is now contributing to the broader economy. Last week’s final revision to third-quarter GDP showed that housing represented 10% of the growth while accounting for less than 3% of GDP.

Chicago and New York were the only two cities with negative annual returns in October, down 1.3% and 1.2% respectively, the Cae-Shiller survey says.

In Phoenix, which has led the recovery, home prices rose for the 13th month in a row, posting an almost 22% one-year change. Detroit, which also fell severely during the downturn, posted a 10% annual gain.Minneapolis followed at 9.2%.

Home price increases are being driven by rising demand, strong investor interest, a shrinking inventory of homes for sale and fewer foreclosed properties, which tend to sell at a discount to others.

The supply of existing homes for sale fell in November to 4.8 months, based on the current pace of sales. That was the lowest level in more than seven years, the National Association of Realtors reported last week. Realtors consider a 6-month supply to be a balanced market between buyers and sellers.

The Case-Shiller numbers are similar to those reported by other home price trackers.

The housing market helped pulled the economy into recession in 2007 but it has emerged as a positive contributor for the past six quarters, government data shows.

Higher demand — and higher prices — are inspiring more home builders. The National Association of Home Builders expects housing starts to be up 25% this year from 2011. That recovery will come off the worst year for new home building in more than 50 years. Builders expect the recovery to be slow and stronger in some cities than in others.